This newsletter is written by Ina & Gerard & Willemijn. We would like to give you a look into our life here in Ireland.


Last winter, in November, I started participating in Scór Na nÓg. This is a competition in the GAA clubs. It involves dancing, group and solo singing, storytelling and drama. I took part in the drama and group singing, but in the club finale we only won with the drama piece. It was called ‘the salmon of common sense’. It’s a modern version of an old Irish legend. Some of the characters were Donald Trump, Louis Walsh, Sharon Osbourne and Kim Kardashian. We proceeded to the county semi-final and final, the provincial final and so we came to the All-Ireland final in Belfast! To our great joy, we also won this one!! 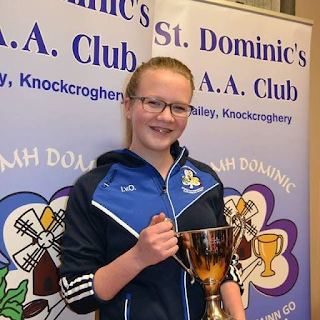 We got a cup for the club and then all a gold medal. Back home in Knockcroghery, there was a celebration bonfire with a lot of the club members and we performed the piece once again. As winners, we were in a lot of newspapers which was pretty cool! About a month later, all our parents performed the piece. Dad was the fish and mom played my part.


In February, I went to London to see Shakespeare’s globe theatre with my English class. It was a really fun trip, but also extremely short, only 2 days! Still, I’ve seen a lot, from the Big Ben to the science museum and a LOT of McDonald’s.


Nothing much has happened at school, I already finished my summer exams and I only have 1,5 weeks of school left before we’re going to the Netherlands.


This winter I wasn’t that busy. Like Ina I participated in Scór but then for the Under 12’s, we did a play during the club final. I have been helping Pat (our Landlord) on the farm. During the lambing season a lot of lambs have been born and a couple of calves. I like working with the puppies the most, they are sheepdogs and by playing and working with them when they are young they become very good sheepdogs. The better they do their work the more Pat can sell them for!


After the summer I go to secondary school and I’ve been accepted on the same school as Ina, I’m really looking forward to that. I have been saving all my pocket money and bought my on tractor from Lego Technic. I made it straight away as you can see on the photo. 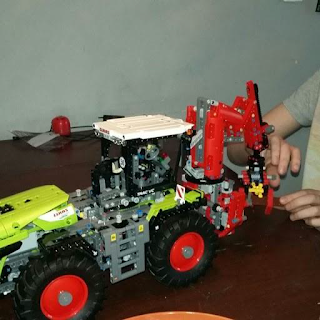 During the Easter break I had a sleepover with my friend, his family comes from Latvia and Slovakia. It is always a lot of fun, he also came to my house. After the break it was only 4 more weeks to school because we’re going to the Netherlands from the end of May until July. This means I will finish school 5 weeks early, but I will get some schoolwork with me.


Last October I was given a computer to do my schoolwork, the teachers and I are very happy with it. I use it to read and write. When the rest of the class does their English, I go to a room and read my book there if there are words I don’t get or understand I can speak them in the computer and the program then describes the word and speaks it to me. I also use it to speak in my book reports and my own stories. My teachers have spoking with mum and dad and they told them it’s going much better with reading and that my reading level is now at second class and I’m in third class now.


Every week I go Irish dancing I’ve started the heavy shoes, we have learning a lot of the soft shoe dancing. I like my teacher he is nice but sometimes he is very strict. With Christmas Pat (our Landlord) gave me a stand where I can hang all my medals. 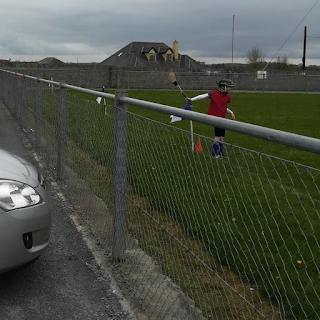 A couple of weeks ago I started with camogie which I really, really like that and there’re a lot of girls from my class in my team.


After the Easter break I only had 4 more weeks of school because we go the Netherlands. I’m going to bring schoolwork and my computer so I can keep up my English!

Thanks for reading our newsletter! If you want to receive more of our lives in Ireland you can subscribe by sending a email to omireneenrichard@gmail.com
Geplaatst door omrichardenirene.blogspot.com op 16:41

The summer is leaving and the autumn is coming with all it colours and rain, but lucky all turf/peat is brought in dry and we will be warm during the winter. We did more over the summer…. 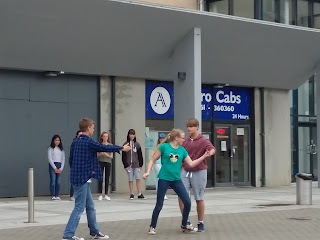 During Impact we welcomed 33 participants, some of them were here for the 2nd or 3rd time. Irene was cooking for 120 people that were staff and participants, and she was blessed with a great team. It was amazing to discover talent with in our own staff. During the cooking they had great conversions from how to cut an onion to more Theological subjects.

The first 5 days were filled with training and equiping. After those days everyone was part of a group that were sent out to different churches around Ireland to help with evangelism outreaches.

Richard and Ina were part of the group that went to Shannon, a city in the West of Ireland. The church in Shannon holds around 30 adult and 20 teens and kids. Ina was almost immediately part of group teens, so new friendships were made. Every morning they did door to door evangelism, in the afternoon they were in the square in the centre where Ina also participated in dramas. In the evenings there were activities in the church. In the beginning of the week the teens mostly let the adults do the talking, but by the end of the week most of them could say that they had a conversation during the door to door. It was an encouraging time, but at the same time we saw spiritual poverty from the people. The young adults and teens were open to talk about the gospel and they have questions, but the older more grown up are surly.

BCM
After Impact it was time for all kids to go to BCM Camp (Bible Centred Ministry). With thanks to our supporters, who made it possible to send the kids, they all had a great week. Hearing Bible stories, learning memory verses, crafts and games. Hanging out with all fellow believers was very special. For us, as parents, it was a good time to spend some quality time together.    Visitors  In august we had visitors from the Netherlands and were able to show what we are doing here, and what a great country we are living in. It was great to talk without using any technology.

Change
In the last month we made a difficult decision, we left the church in Athlone. We went 2.5 years to the Baptist church, and we were able to build up a relationship with God in English. Near the end we were getting a hunger to do more in the church, and a lot of things were already fulfilled by others.  We had the feeling that we were consuming and standing on the side line. God made it clear to us that He had a place for us in different church, a church in Roscommon with the Church of Ireland. They have had a new pastor for a year now, and before him the church had a vacancy for 20 years! There are not a lot of people in church because of that, most of them will come to the Sunday services but not a lot attend the midweek meetings. We see this as a mission next to our mission with OM. Ina made it clear that see wanted to celebrate the Lord’s Table also, and here in the church she needs to do Confirmation. She will do that, Lord willing, on Sunday the 6 of November. This is, for us as parents, special, but it has also been a long time for the congregation, so it is special for them as well. At the same time, it is an opportunity for Ina to share her faith with classmates and friends, and invite them to church.

Work
Over the summer we had a professional painter at Lacken.  He helped Richard with painting the outside of Lacken house. There were a lot of bad places on the windows so it was necessary to repair and to paint it. But when they started they found that all windows were bad. It was more than 10 years ago that they were painted and in a land where it rains 90% of the time! They were able to do 2 sides of the house. 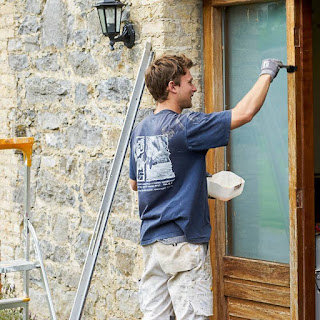 On the 3th of September our new staff arrived; 3 singles, 14 students, and a family. Irene did the cooking for them for the first 2 weeks of training. After those 2 weeks we had a team in from First Baptist Church Woodstock, Georgia USA. They helped during our team retreat and with the outreach at the National Ploughing Championship. Irene cooked for them as well, so during those days Richard was at home more to help with the kids’ homework etc. We hope to put up some stories on the website

In the meantime, the kids are back to school and there is some structure back in our lives.  This is great after a summer holiday of 2 months ( 3 for Ina! ). In December we told you that the school thinks that Willemijn has dyslexia. In February they were able to test her, and the test shows that she has a severe form of dyslexia. Without the help of technology, she would not be able to ‘do’ school. At this moment we are waiting for the technology to come into place so she can enjoy school again!

Thank you for reading our newsletter and joining with us in prayer.
Willemijn, Gerard, Ina, Irene & Richard 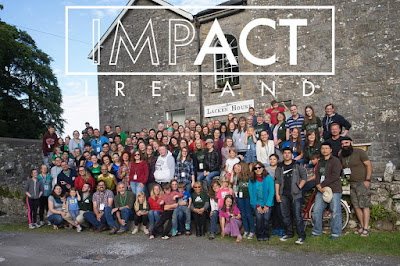 Do you want to experience mission? Come to Ireland next year!

Do you want to know more about these opportunities? send an E mail to ireneenrichard@gmail.com or info.ie@om.org